All adjustable FFF watchbands are ‘buy 2 get one free’. Just add 3 to your cart (any size/leather/stud color) to see discount.


We created the Custom Cordovan Button-Stud Watchband, (the first button-stud watchband on the market) and brought it to market with our first products in early 2012. A couple months later, we introduced the adjustable button-stud band, allowing the same simplicity and comfort of the custom band, but sized to fit any wrist, (and if it doesn’t fit yours, we’ll get you one that does) while maintaining a sleek look of the original by hiding the adjustment holes behind the watch face. Since then, we’ve had a LOT of imitators; so it looks like we’re doing something right.

“How do I know which color is which??” Select a leather color from the drop down menus below, and the photos will update to reflect your choice.

Check the Shipping Information page for our time to hand-craft your order and shipping options, and our pretty damn liberal return policy, in case the goods don’t work out for you.

Our installation ‘best-practices’ to avoid scuffs (and get all the benefits of the design). Your first inclination, with a shiny new watchband, is to take it out of the box and slide it through your watch face, just as you always do with a NATO band: Tag end first. However, pulling the band all the way through the springbars, or removing your band by pulling on the stud end can result in a scuff from a sharp-edged watch case. Stay (so) fresh and (so) clean (clean): [unordered_list style=”bullet”]

On some watches (a vintage Omega Seamaster, for example), the springbar is very close to the case itself, leaving a tight space to slide a NATO-style band through. If it is relatively easy to swap grosgrain bands on your watch, this is likely not your situation. However, if you find that your case/springbar dimension is particularly tight, and getting your new band through is proving difficult, form•function•form recommends obtaining a springbar tool in order to easily remove the bar and install your cordovan band. The Swiss company Bergeon makes a quality option in their ‘6767’ model. It will take at most 15 seconds to figure out how to use the tool to remove the springbars; just make sure the ‘spring’ doesn’t shoot the tiny part across the room–that will take hours to undo.

Installing the band ‘point-first’, as above, rather than ’rounded-end first’ will make the whole process go much more smoothly, especially in a tight springbar gap; we intentionally pointed the end of the band to make installation easier–slipping the small point through the springbar enables a good grip to pull the rest through.

Got 3 different bands for some vintage Timex Mercury watches I acquired. They add a great style to the watch and break in wonderfully with time. The ability customize the leather color and fastener color allowed me to add a unique touch to each watch! 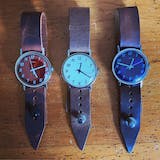 The inscription inside the band is beautifully done. Looking forward to wearing this thing hard and tough 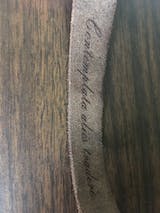 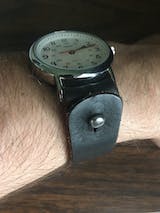 This is the 6th FFF button stud watch band in my collection. I wear them with my Rolex, Omega, and Panerai watches and I always receive compliments on how nice the FFF bands look. In all types of weather, and for all types of activities, this is the only watch band you'll ever need!

I ordered three 18mm button stud watchbands and included a note about my 5.5” wrist and concern that bands would be too long and thick. Well they are the best fitting and most comfortable bands I have ever had. They are ultra thin hf latte, ultra thin hf dark brown, and chromexcel blue ink cavalier. Three for the price of two is a great deal. I am very pleased.
Jean C., Vermont

Great product. This is actually the second one I’ve bought, they are unique, look great and are excellent quality. I would highly recommend!

These are the best watch bands money can buy, and they are so friendly and kind and professional.

I wish these watches and watchbands were durable. I have purchased them on two occasions. The watches themselves lose time and often stall, sometimes they just don't run for a while and then come back to life. But they cannot be depended upon. The watchbands fail after about a year of daily wear, the leather cracks, distorts and rips apart. I just had the metal stud rip the leather out of my last strap. After a few years I have spent about $200 on their watches and watchbands and all I have to show is three ripped bands, one dead watch and one unreliable, heavily scratched watch. It just isn't worth the money unless you are only looking for a watch to wear when you are not doing anything with your hands, just keep them away from work and adventure. That being said, they are comfortable and handsome.

Courtland...hey there. Apologies for taking a couple days to respond to your review. I wanted to look back at your purchases. We see a purchase for a midday weekender (i'm guessing that's the one in the photo, maybe we missed a purchase in the history though) in 2013 (7 years ago), and some bands in 2016. We're going to send you replacement bands (we'll be emailing you separately to make sure we have your current address). Full grain leather can be quite durable, but there are some factors that will limit its longevity: wearing every day without switching it out and giving the leather a chance to fully dry out (particularly if it gets wet/sweaty) is the main cause of failure. Another factor can just be a fluke weak point in the hide. We're happy to send a replacement out. As to the timex...there are absolutely different grades of watch face materials. Premium watches use sapphire crystals that are quite scratch resistant, and rolex for example cuts their own faces that are somehow magically even more scratch resistant than sapphire. Timex has recently released some made-in-america watches that use gorilla glass (like on iPhones and a lot of other cell phones) which is also quite scratch resistant. By default, though, timex uses a less durable crystal, and it will pick up scratches over time if it gets dinged and dropped.Regardless, we'll be sending you a new watch and replacements for the bands you purchased. Just check your inbox for an email to let us know about your address.
123