I couldn’t be happier with the watch we bought. It was delivered quickly to Australia and honestly arrived earlier than products I have bought in the country. Service and communication was great and would highly recommend their products.

They have great service and are super friendly

This wallet balance itself between the need of cards storage, ease of use, portability and "taking note on the fly"...! Last but not least, style & craftmanship is second to none..
Thank you, and fully recommended!

I'm LOVING my recent purchases from Form Function Form! The quality, design, and functionality are all incredible. Every one of the pieces I ordered is serving its purpose beautifully, and I cannot recommend this company enough. My watchband fits perfectly, looks amazing, and is exactly what I didn't know I needed.

I'm LOVING my recent purchases from Form Function Form! The quality, design, and functionality are all incredible. Every one of the pieces I ordered is serving its purpose beautifully, and I cannot recommend this company enough.

Love these straps, they're cool, stylish, and extremely comfortable. And the customer service is the best I've ever experienced.

I love this wallet. It became my daily the second it arrived. Fits the hand like a well worn in pair of leather shoes. And the service from the USA to England was super quick. Love it. 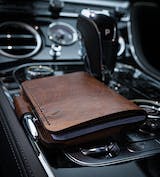 What a beautiful gift was made for my daughters for the baptism. Just perfectly enscripted with so much meaning! And the leather quality is unbelievable! They love their journal covers so much.

The wallet ensures I am never too far away from my notes from the last week and that when I need to take a note it's there for me. iPhones don't cut it for notes - they too easily distract you from what you really need to do - this is the perfect solution. In terms of size, it's probably just a little bigger than I was expecting but I still love it.

My partner and I have made four purchases from Form Function Form and we've loved each experience and each item. Not only are the folks at the store super friendly, they're also very helpful in guiding buyers to the perfect gift. Our most recent purchase was birthday gift for a friend turning 60. We gave her a journal with her hometown stamped in the leather. She LOVES it! And she told us it was her most memorable/favorite gift.

I guess I’m a classic/stylish dresser overall. Basically simple, good things, rarely big “statement.” So it’s the details that provide style: a subtly special belt, a simple enamel pin on a bag, etc. This band on this classic watch does the trick, especially now that the leather has broken in a few weeks. (I may have helped with some extra twisting and rolling off my own.) Surprisingly frequently, I get a “Cool watch!” comment. That’s all it takes. 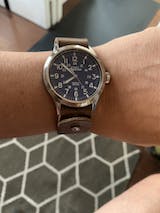 Love my custom watch band. Simply the most ergonomic and comfortable option.
Work with your wrist on a desk? Typing on a keyboard. You need this. Got a few millimeters smaller than the measurement because my last one stretched a tad. Currently this one is a little too tight, obviously, but I think in a few months it’s going to be perfect.
Thanks to the Team, they got me a stainless stud for it as well because I’m slightly allergic to brass. Love it! 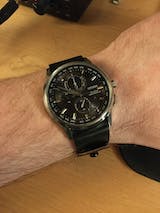 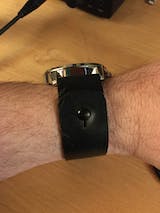 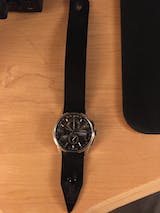 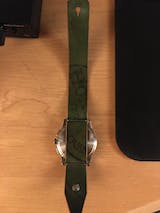 I bought this back in December of 2019, so it's not quite a full two years, but I've been wearing it every day since then. Let me tell you: It's excellent. I originally ordered it because I wanted a slim camera strap for my Fuji X100F that did double duty as a bracelet, and it worked perfectly at both of those things. The X100F has since moved on to a new home, but the bracelet is staying wrapped firmly around my wrist, hopefully for another few years to come.

It's a little looser now than it was two years ago, but then again so am I.

N
FFF Button-Stud Apple Watchband Nick M. (Ivanhoe East, VIC, AU)
It's as good as they say it is.

I bought this watch band because I'd bought another FFF product (their camera strap wrist band) and wore it every day for two years, so I figured why not put another thing on the other wrist.

It is so much better than any of the previous watch bands I've owned. It arrived too-tight, as described, and after wearing in over a week or two ended up feeling like a second skin. The fact that there's no buckle on the underside is a god-send for those of us who spend all day at a keyboard.

It feels like it'll last me a lot longer than the Apple Watch it's attached to, and look better and better while doing so. And if it ever falls apart or I lose it in a bear attack or something, I'll definitely order another.

My father retired after a long career of helping others. He talked about writing and stories and a town or two he's made up. And he couldn't tell me, for his life, what he wanted to do in retirement. So I got him this beautiful notebook cover and notebook. The leather smell is wonderful, the color is rich, and the workmanship is top notch. Highly recommended.

Received my strap today and tested on my Daytona. Have a peak on my picture. Thanks Adam ! 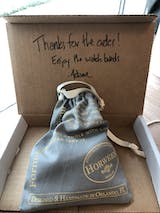 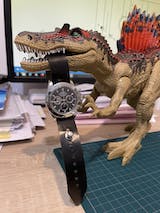 Love my Charette wallet. I decided to upgrade to the Charette for the cover. The architect wallet has been great, I just got tired of replacing notebooks. Long reign the Charette.

My wife wanted to get me a nice wallet to replace my old ratty one. After a month of looking around I got in touch with FFF and asked about a custom wallet with Cordovan leather outer and more supple inner. After walking me thru the design, and refusing to make one with unsuitable materials the wallet was finally delivered.

Not only is the workmanship fantastic, the design is great. I would absolutely recommend FFF and expect to buy from them again.

This is my 6-7th buy of these items from FFF. I discovered these cuties, about 10 years ago. Keep a user and a spare of each in my desk, since then. World class leather and workmanship, Design is beyond belief. Your Grandkids will figh over hem whe your gone, even with heavy EDC use and weather issues. I buy these for gifts and always find a great response. Reasonable price for high quality. Buy with confidence. Shipped in 48H.

Love this band. Bought my second one. Great quality.

D
Charette Wallet David M. (Gresham, OR, US)
Had it for years

And it's the best.
Replaced my stolen architect's wallet with this one and couldn't be happier. They're both nice but I prefer this one (a little more protective of the notebook)

If I ever need another wallet I won't shop, I'll just buy this again

Loved how it turned out! Perfect for a graduation gift. Great service, fast, and super cool product.